Y’all need to get some friends more like mine. Case in point, my best bud directed me to this Gospel Whiskey Runners album, Hold On, apparently released in September 2011 (HOLY SHIT, WHA?!) and let me tell you, it’s a sort of perfection that’s hard to articulate. 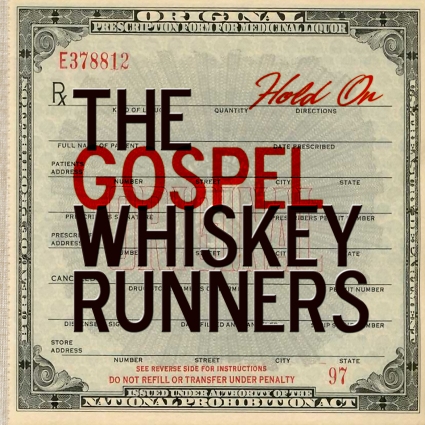 The fact that this album was originally released years ago (from what I can tell) lets me know that this band is one that operates ahead of its time. To compare it to one of our favorites, Hoots and Hellmouth’s Salt, would be fair, I suppose, given that lead singer Jerrod Turner’s voice is so incredibly similar to Hoots’ singer, but to do that would imply that this album had not come first. It would imply that the same stompability and sing along spree present in Salt was a pre-cursor to this beauty here and that’s just not the case.

“Hold On” takes standout honors here (there is some seriously fucking righteous lyricism in that jam) but the rest of the album possesses the same beauty and is just as deserving of your time. “The Wound” is a breathtaking and sadly reminiscent take on what happens when relationships fall apart and “The Ticket” takes on both folk and Americana superbly and in a way that is rarely heard.

I spent my weekend with friends that I love so hard and when I was home alone, thinking of my luck regarding the lot I’ve been gifted as my pals, this album soundtracked those thoughts and those videos of us acting like teenagers, making dirty jokes around a kitchen table, letting out all that grown up shit we can’t when we’re with our kids nearly every day. But we’re still fun and we’re still awesome! Coming home (and coming down) Sunday, this album played all day in the background and life felt grand.

You can’t ask much more from an album than that: To soundtrack your best and worst times perfectly on both fronts. It’s a fine line and a tough road to hoe but Hold On manages it swimmingly and seemingly without effort.

Amazingly, Hold On is available over at NoiseTrade. It is ever so highly suggested that you get this album in your life.

Lord Huron’s new album, Lonesome Dreams, is pretty much the best thing ever. It’s released officially 9 October, at which point I’m sure the indie blogosphere will shit their collective britches because seriously, it’s that good, but today you can stream the whole thing over at NPR.

And down below, one can listen to / download ‘The Stranger’.

We highly suggest you DO ALL THE LORD HURON THINGS! Happy Monday morn’, indeed.

Too often, the banjo is ignored as a potential instrument of rock. this mountain is working to remedy that, one sweet, sweet jam at a time. God bless their little hearts…

There is a spirit that surrounds certain kinds of folk rock and bluegrass and it is one based in love. Rock music, even hip hop, possesses it too I suppose, but something about the soul of folk tugs at my own heart. It’s a feeling that everyone is invited and everyone is included. One of the literal definitions of folk is “people in general” — people in general. All people, everyone. Music that carries that descriptor in its narrative is bound to make all of us feel surrounded and loved.

From first listen it is obvious that the men of this mountain not only understand that but they feel it just as I do. The band released Future Ghost last month on the heels of their wonderful S/T EP last October and it’s a wonderful study of the definition of that word folk and that genre. We’ve had this album on repeat for days now with no signs of stopping and each time through I find something else to relate to, another note to dance to. In the fewest words possible (something totally foreign to we here at Folk Hive), that’s the highest praise I can think to bestow on an album…

Get this album. GET THIS ALBUM.

This s/t Prairie Empire record is fucking gorgeous. Here at Folk Hive we make it a point to not cry unless it’s musical related tears (because those are socially acceptable) but ‘ten fold’ sent a single tear down our cheek, in honor of its sheer beauty. We all do things so wrong sometimes…

I spoke with Brittain Ashford, the fair lass behind this album that we’re in love with, and stumbled upon coincidences. A. We’ve written about this before. A full year ago. But it seems this album is just now receiving a proper release so we’re talking about it again. B. There is clarinet on this album (which has a soft spot in our hearts given the fact that we can actually play one of those bastards) and that clarinet is played by a man named Cody Caudill. We’ve featured his lovely band Harlowe and the Great North Woods before. And C. Turns out that the man behind Olentangy John, who made one of our favorite albums this year, just moved cross-country to devote his time as a banjoist in Prairie Empire. Add up A, B, and C, and then multiply it by just how beautiful this album is and right there you’ve got the actual equation for AWESOMENESS.

Listen and buy below, kids.

Allen’s been a Folk Hive favorite since hearing his cover of Wilco’s ‘Summerteeth’ on a Muzzle of Bees compilation and subsequently getting into his album The Marriage that he put out with Tomato Junction in ’08. Dudes embarking on a tour and also giving you this song free. Snag that shit and go see him on the road.

I have no idea how I found this which leads me to believe that there is a maker and that he knew yesterday that some southern gospel was just what my wounded soul needed.

Back when we were little we went to church and they used to let us sit out in Big Church instead of heading to the kid classes. This is an old town, full of old money, people, and places of worship. Those weather worn voices singing these songs didn’t seem like much then, my great-granny singing as loud as she could with her deep voice while she rubbed my thumb nail. The pillars of our community went to my church and back then it was embarrassing to me. I couldn’t imagine singing that loud, especially when you knew you weren’t good at it. I didn’t understand why those who filled those pews did it anyway…

This collection of four songs, recorded at Columbus, TX’s Schneider Dancehall, originally built in the 1930s and since restored, is stellar. One take, no overdubs. 4 glorious revival songs, all beautiful. If church had sounded like this to me when I was younger, I might have stayed…

5:30 a.m. comes quickly when you can’t sleep and any good folk blogger worth their salt will tell you that writing and listening to melancholy-tinged jams in those early hours is not always the best for the soul. Most mornings your marrow can take it; some mornings you just need a banjo, an americana yell, and the fiddler from Brown Bird. For that, we suggest consulting the music of Poor Old Shine.

We first stumbled upon a streaming track from Poor Old Shine’s upcoming album recorded live at Infinity Hall and from there, it was over for us and our ears. Count us as fans. Threadless Soles was released in February of this year and how sad we are we’ve been without it all this time, for indeed it has some medicine we could have used over the past few months. The newest album includes a cover of ‘Will The Circle Be Unbroken’ that we imagine will be one of the greatest things to enter our eustachians this year.

Listen below. We think you’ll agree…

It is a fucking travesty that we have not bombarded you, reader/music lover, with talk of The Felice Brothers before. This post is a succinct remedy to that problem.

Today seems like a good day to do that considering that at midnight night last the band released 20 songs for $5 bucks and all 20 are a delight worth your time. Shit, their entire catalog is worth your time. Get on this train, people.

God Bless You, Amigo holds 12 original songs the Felice Brothers have not released before but even more awesome than that is the fact that the album also includes 8 traditional folk jams. Let us repeat: 8 TRADITIONAL FOLK JAMS REIMAGINED BY A FOLK PUNK BAND THAT FUCKING ROCKS. Obviously, you understand our excitement.

You’ve got $5 bucks. Grab “Lincoln Continental” below and then jet off and snag all of God Bless You, Amigo…

Someone, somewhere, has been talking about this and I’ve seen it, heard it. And yet I did not heed their word until I accidentally stumbled on this yesterday. My nonchalance about The Parmesans is a thing I now regret…

{Well, you cheeky little fuckers, this ain’t no album cover! Might I suggest, you Parmesans, that you find a country porch and photograph yourselves on it? Bring in a goat for the shoot. There should be a goat.}

Folk and bluegrass need not be perfectly polished to do what they are known to do but often, it happens that way. Bands like Spirit Family Reunion and Shovels & Rope eschew that sound though and it makes me love it all the more. It is music that sounds like it was recorded on my front porch and that’s not a slight — that’s as it should be. Folk and bluegrass on a porch is my own personal Heaven…

It’s possible I read at one point the band was putting out an album but that tidbit was lost with the brain cells I drank and danced away this past weekend when our friends band came to town and played an Ozarks Mountain Daredevils cover. Apologies, y’all. Still, these demos should tide you over for a country minute. All 5 songs contained therein are a delight but the 0:52 mark of ‘Blooming Rose’ sort of punched me in the gut. And then! And then 1:56 hugged my heart. So, you know, RAD.

NAME YOUR PRICE for Oakland Demos

Doug Paisley. Hope For Agoldensummer. Cory Branan. Glen Hansard. And that jam from Trapper Schoepp and The Shades, hot damn. The only thing missing from this mix? Your mom.

This here is a musical thing you need in your life, y’all. That Shovels & Rope jam, holy sheepshit. I swear, stumbling upon this band has absolutely made my summer. I’m convinced these two, Cary Ann Hearst and Michael Trent, just don’t have it in ’em to make a shit song. NOT A SINGLE SHIT SONG CAN THEY MAKE. First, there was that sampler (which you should have by now, ahem) and now ‘Birmingham’ from the upcoming O’ Be Joyful. I can already tell you this album is one of my favorites yet this year and I haven’t even heard the fucking thing. TRUST.

Get that whole sampler below. No, dude. SERIOUSLY, Get it.

PLEASE NOTE, KIDS: MP3s posted here at the Hive are for sampling purposes only. Don't be the dick that listens, enjoys, and then doesn't support the artist. A large majority of the artists we enjoy and attempt to bring to your attention make this music for fans and it's the least we can do to support them. We recommend buying their vinyl (if applicable); it's always megatons better than an MP3 anyway. On the other hand, if you're a band or label that would like an MP3 removed, email us at folkhive [at] gmail [dot] com and we'll make it happen.