If you have one of those dude-bro friends that repeatedly claims, while downing Bud Lights at the bar, that music these days sucks, this is the list you show him to prove him wrong. Maybe now he’ll shut the hell up. Also, you should stop being friends with that guy. He probably owns multiple  Nickleback albums.

I spent this year immersed in music and not once was “Man, music this year blew” a thought that entered my fuzzy brain. I’ll give you this: If you’re doing nothing but listening to the radio, the sentiment that things in music just aren’t what they used to be probably holds true. But on the other hand, if you’re a smart one, you’ve found your favorite blogs or you’ve taken the steps yourself to seek out beautiful jams and for you, 2012 was a fucking inspiring year of music.

Below, Folk Hive’s List of Most Revered. Here you will not find what’s called a Best Of List. We do not deign to know what was the best this year — we’re not critics so that job falls on someone else. We can only tell you what moved us these past 365 days and the reasons why. Below, a listing of 10 albums that did just that. Observe. 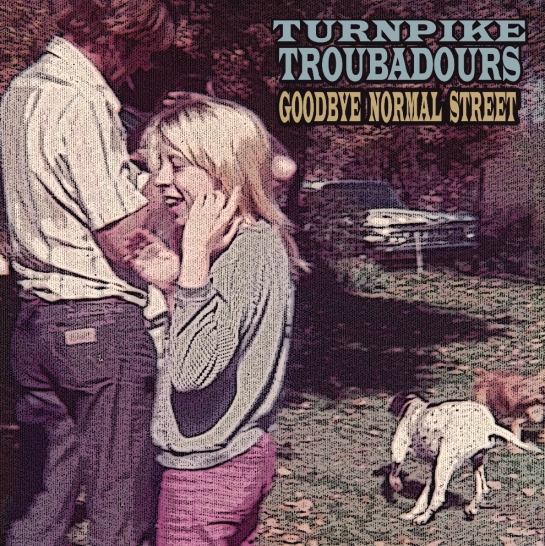 I recognize that the third and latest offering from Red Dirt heroes, the Turnpike Troubadours, is not up everyone’s alley. Goodbye Normal Street is a full on country assault of your ears and for some of your boats, this ain’t what floats it. But being from where I’m from, there is a comfort in music that is home to me, whether I like it or not. My childhood was filled with Garth Brooks and George Strait, recent Gods of Country, and they dominated my musical landscape from a young age. As I got older, I moved away from that because Christ if it isn’t a trite genre now, full of cliché and bullshit rhyme, but the Troubadours bring it back to where it should be. If this album had not been filled with heart, great stompability, and jams written by Felker (a man that fucking owns the words to his songs in a way I rarely witness), I’d still love it on the merits of what it says country music can and should be. 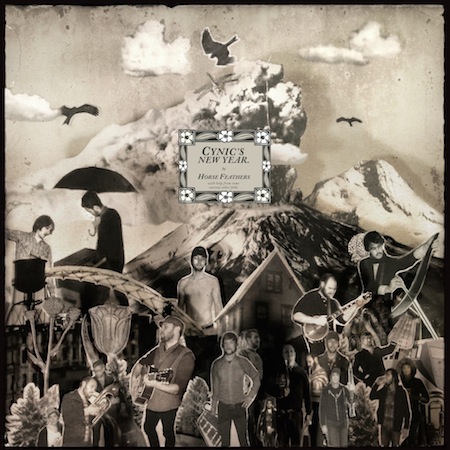 It is perhaps true that never has a folk outfit so beautifully and perfectly blended words, vocal, and an array of instruments as Horse Feathers does and this year’s release Cynic’s New Year bolsters that statement. It is Bruce Springsteen in spirit for the Midwestern set. Cynic’s New Year is strife and poverty and happiness, if you can find it, within that, despite the odds. “Last Waltz”, one of our most favoritest tracks of the entire year, is a beauty …

[ Number EIGHT :: The Strumbellas My Father & The Hunter ]

From the very first urge to stomp and clap on The Strumbellas excellent debut My Father & The Hunter, it’s clear that we’re in for a ride. For some time it was so that “Left for Dead” had a place on every personal mix I made. It was replaced by “Diane” and then “Carry My Body”. Beyond that there was “Underneath A Mountain” which has become one of our go to Feel Fucking Great Anthems. While taking stock at the end of year last it became obvious by play count that this album had dominated our listening not even on and off but consistently since we’d encountered it. While every album on this list is one that we have loved hard, this one in particular is one that we apparently loved long as well.

The Strumbellas :: Underneath A Mountain [mp3]

BUY My Father & The Hunter :: SITE

Nothing written in the history of this album does its beauty justice. We have seriously genuine honest feelings of love for this album so great that words cannot ever do it justice. (That’s our review. Seriously.)

This is one of only two non-indie label released album on this list and while we typically give all our love to bands and outfits that won’t garner Rolling Stone covers, the 1970s-tinged perfection of The Sheepdogs S/T release this year was too good to forgo on our year end favorites list. It should be noted that while this album was blessed (or cursed, depending on your point of view) by big label production (e.g. fucking Pat Carney, you guys) and promotion, the legwork for all The Sheepdogs success was done over years and years by the band itself and not some label machine ran by beardless dudes in goddamn ties. The band’s live show has been honed over an extended period of time spent toiling in bars and it shows from the bonafide groupie presence in the front row all the way back to the old Allman Brothers fan in the back row, jamming as if it were Duane Allman himself on guitar. Seriously, y’all we witnessed this first hand. (Two aside thoughts about that: 1. Goddammit, groupie bitches, I drove 4 hours for this show, I will rip that feather out of your hair if you cut me in line and 2. Highest of fucking fives, old dude in the back row with your badass handmade tie dye shirt and braid.)

While it’s obvious this album was produced by a major label it’s merit rests in the fact that the songs contained therein were either released previously on other albums fucking stellar in their own right or perfected on the road just the way they deserved to be.

There are a million words we could write about The Avett Brothers: Of their perfection when they began, of their growth in their formative years as a band, and how they’ve changed into something that maybe their oldest fans do not worship as hard but that’s for another time. The fact of the matter is that even a shitty Avetts album is still a damn fine album. There are gems here, to be sure, and frankly a couple Avett Brothers gems are still greater than most albums released these days and as such, we love The Carpenter.

The Avett Brothers :: Down With the Shine [mp3]

Because seriously, you had to know this would end up here on our list. From the positively perfect first listen upon discovery of this album to the exceedingly righteous experience of seeing the band up on a mountain in a singing, dancing crowd of 75 or so, The Lumineers contributed to a glorious year of discovery when it comes to music. The band has moved on from the size of that mountain crowd to a rapidly growing fan base that is expanding even as we type and they are certainly folk’s success story of the year. Amazingly, it couldn’t have happened to a band that deserves it’s success any more than this one.

Fans of stomp, clap, and holler, ye musical gods have arrived and they go by the name Spirit Family Reunion. 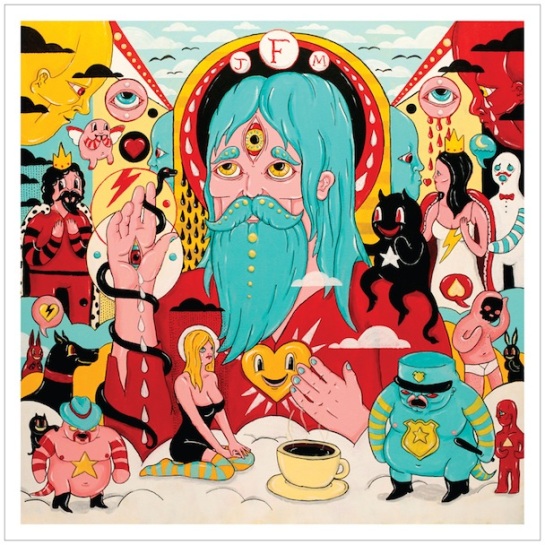 There are things about J Tillman, man who changes his moniker Prince / Artist Formerly Known As style whenever he damn well feels like it.. that are well and true. 1. He’s a goddamn musical genius. 2. He sports the most righteous of all indie beards. And 3. There is no way we’d want to encounter the dude in a dark alley. Reason being? He’s witty, sarcastic, and intelligent as fuck, something that’s obvious if you’ve ever watched an interview he’s given (our favorite). He would slay us with his comebacks, he would laugh at our trivial knowledge, and he would balk at that shirt you’re wearing.

Still, Misty seems to be a swell feller regardless and this year’s release of Fear Fun was a gift to people like us, we obsessors over words (see the insert that came with the vinyl album). How a man manages to both frolic and maintain balls to the walls seriousness in his music while tackling what seems to be an unhappiness of epic proportions we’ll never know, but Misty pulls it off. We did not review this album, though we wanted to greatly, for we were worried that the artist would get wind of it and ruin us even though our thoughts on it are glowing bright and sprinkled with glittery bits of love. We just couldn’t take that risk.

When Tillman is Father John I cannot decipher his words for their meaning nor his songs for their true depth but I feel a kinship with them anyway. For us, that’s been the beauty of this record.

Father John Misty :: Only Son Of A Ladies Man [mp3]

If there is any album this year that can be called underrated and underappreciated, it is this one right here.

We’ve went on about this album and this band before. The praise we heaped upon this album once proved well deserved for these songs have soundtracked road trips, river trips, and gathering with friends, however few and far between they’ve become as we’ve aged. In our minds, this band that originally warranted merit due solely to it’s makeup has now become greater than that — this is not Blitzen Trapper, this is not Alela Diane’s Wild Divine. Denver is The Highwaymen in camaraderie and Denver is a band that has perfected the beauty of stomp and holler music that belies, in its seeming happiness, something deeper. There is heartbreak and while that’s common in music (and in life) what’s different here is that there are lessons learned in those songs, too. No more howlin’ at the moon.

Plus, there’s a fucking banjo.

PLEASE NOTE, KIDS: MP3s posted here at the Hive are for sampling purposes only. Don't be the dick that listens, enjoys, and then doesn't support the artist. A large majority of the artists we enjoy and attempt to bring to your attention make this music for fans and it's the least we can do to support them. We recommend buying their vinyl (if applicable); it's always megatons better than an MP3 anyway. On the other hand, if you're a band or label that would like an MP3 removed, email us at folkhive [at] gmail [dot] com and we'll make it happen.